Ultra – that’s where you end up when you one-up your usual Plus. In other words, Samsung’s outdone itself this year and has gone above and beyond its S20+ to give us the Galaxy S20 Ultra.

Leading the spring-time roster this year, the Ultra marks a shift compared to the 2019 lineup. Where last year we had the similar in most ways S10 and S10+, and then the S10e positioned below them, this time around there’s a model above the mainstream S20 and S20+ – the new moniker makes all the sense then.

And it’s ultra alright. Sure, it’s got an even bigger display and packs a larger battery with faster charging support than the other S20s, plus you can have it with up to a ridiculous 16GB of RAM, while the non-Ultras top out at a modest 12GB. But that’s not it.

It’s the camera – likely the most extraordinarily all-out setup we’ve seen to date. The primary cam uses a sizeable 108MP sensor which combines 9 tiny pixels into one big one with processing designed to make use of the extra data being gathered – Nonacell as Samsung calls it. 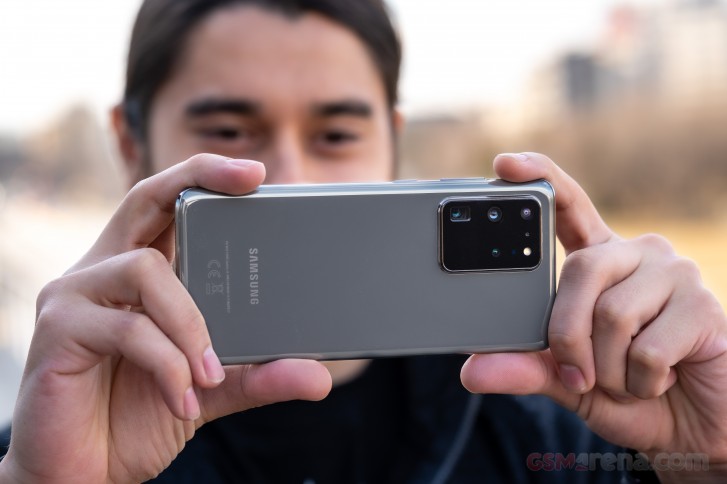 Then there’s the telephoto shooter – it’s got an unmatched combination of a big 48MP imager and a periscope lens offering 4x optical zoom over the main. Samsung has ‘100X space zoom’ branding on the back of the phone and we’ll be sure to check by just how much it misses the moon, but in any case it’s a spectacularly impressive tele camera on paper.

The ultra wide isn’t quite there. While it is a new unit with a big sensor and large pixels, it’s still missing a vital part of what makes a truly good camera – autofocus.

Over on the front, there’s yet another ultra camera touch – Samsung’s fitted a 40MP selfie module to set it apart from the so familiar 10MP units on the regular S20s. It’s going to be one lengthy camera section.

Mind you, we’re reviewing the 5G version of the Galaxy S20 Ultra, while an LTE-only variant will apparently also be in existence. It’s not a hugely important distinction for the purposes of this review, as we have little along the lines of 5G networks in our neck of the woods anyway. We’ll be omitting the ‘5G’ for the remainder of the article. Another clarification due here is that we’re reviewing the Exynos version of the handset, as is typically the case.

The Galaxy S20 Ultra 5G ships in what’s become the standard Samsung box for high-end models – black, not very flashy at all. The visuals have changed slightly and now there’s an outline of the phone on the lid, with the ‘S20’ so big it spills over to the sides. 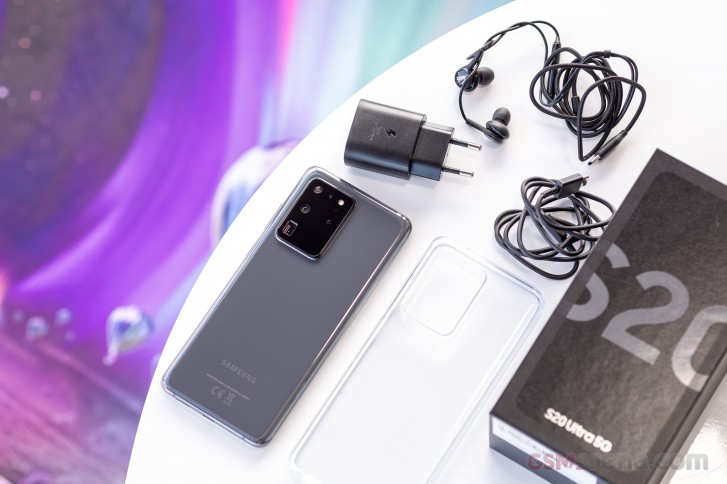 Inside, there are few surprises. You get the 25W charger as opposed to the 45W one, even though the phone supports the higher wattage, and there’s a USB-C cable to complete the link. The pair of AKG branded earbuds ending in a USB-C connector are also a familiar sight from the Note10 bundle. Perhaps the only slightly unusual bit is the clear silicone case you’ll find in the paper sleeve you need to pry out of the lid of the box.